Barriers to Leaving the Abuser

In many cases the victim may refuse assistance or they may accept assistance and then return to their abuser. Typically the victim leaves their abuser multiple times before they terminate the relationship permanently. Domestic abuse victims stay or return to these relationships for many different reasons. Some may stay out of fear of losing their children. Others may stay for emotional, financial or religious reasons, or because they lack social support. The following are other characteristics, emotions and reasons that the victim may have that influence them to stay or return to the relationship. 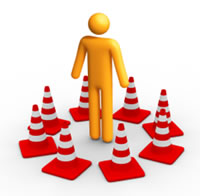 Denial: The victim maybe in denial that they are being abused. They may pretend that everything is okay or be in denial that their partner is the source of the abuse. Frequently, victims make excuses for the abuser, placing the blame on drugs, alcohol or a situation that causes their partner to resort to abuse. The victim wants to believe the best about their partner. Unfortunately, having this is emotion or rationale on their situation often causes victims to take a long time to seek help in most cases. The victim will likely endure multiple injuries and frequent emergency room visits before realizing the severity of their situation.

Shame: This usually occurs when the victim may be too embarrassed to leave their relationship. The victim often worries about disappointing their family. This individual has high regard for their image and what others think. They see themselves as a failure if they leave the relationship. This characteristic often is present when the patient has had multiple abusive relationships and the victim will feel that it is their fault since they have found themselves in this situation before.

Traumatic Bonding: This relationship feature is very common in domestic violence conditions. This is when a victim becomes so codependent on the abuser for them providing them their basic needs that a form of traumatic bonding occurs. The victim often mistakes the traumatic bonding for feelings of love. The victim loses all sense of self-identity and will assume the victim role and take on the beliefs of the abuser. This dynamic is similar to Stockholm Syndrome, where captives or hostages are able to have empathy to the point where they may defend or identify with their capture or abuser. In 2002, Elizabeth Smart was a 15 year old girl who was kidnapped from her home and held hostage for nine months. Smart had multiple opportunities during her captivity where she was able to get help but she did not escape. Many psychologists theorize that Smart had a form of Stockholm Syndrome and that was the way that the captives were able to keep her from escaping.

Guilt: This is when the victim feels that somehow the abuse is their fault. The victim believes that they did something to deserve the treatment that they are getting from their partner. Most abusers are very successful at placing the blame on the victim.

Financial: Many abusers offer financial security to the victim. This is often a reason why victims who are disabled or elderly or have children stay in an abusive relationship. Many victims have the point of view that it is worth tolerating the abuse if the children are being fed and the bills are being paid. They usually do not have the means or resources to provide for themselves. Partners frequently end up financially dependent. Some are not able to complete their education or develop work experience because they have been homemakers raising children. Oftentimes these victims have such low self-esteem and self-worth that they do not believe that they have the skills or qualification to achieve employment.

Children: Many victims do not want to disrupt the children's lives and routine. It is important for the victim to make sure that the children have consistency in their lives. The victims do not want their children to have to change schools, homes or to come from a broken home. They also fear that leaving their relationship will mean that they have the potential to lose custody of their children. The victim often fears that terminating the relationship will isolate their children with the abuser.

Fear of Reprisal: The victim may be afraid to leave. The abuser may give the victim constant threats of being stalked, beaten, attacked or even killed. The victim may also fear that the abuser may retaliate on their friends, children or pets if they leave. For victims who possess a great amount of fear it is vital that they have a safety plan in place. Statistics have shown that victims have the highest risk of being killed after they leave their abuser than while they are still living with them.

Spiritual: Many victims are raised with the belief that marriage is a lifelong commitment. Many religions believe that divorce is a sin. Advice from leaders of religious organizations may often be for the victim to return home and repair the relationship. Some religions emphasize that the woman should be more submissive. When a partner plays a submissive role in the relationship, they are less likely to leave.