There are three core features and three suggestive features of Lewy Body Dementia. These features are use when determining if the clinical diagnosis of LBD is probable or possible.

A probable LBD diagnosis is determined if one of the following conditions is met:

A possible LBD diagnosis is determined if one of the following conditions is met:


Why Is Lewy Body Dementia So Important?

Frequently misdiagnosed as Alzheimer's or Parkinson's disease or a psychiatric disorder, Lewy body dementia poses a diagnostic challenge. LBD's symptoms often overlap with these diseases. LBD victims are losing cognitive ground. They seem to be less prone to the short-term memory loss associated with Alzheimer's than to problems with executive function. They struggle to handle complex tasks like grocery shopping. They also may develop visuospatial problems and find it hard to navigate or perceive distances, so that they lose their way in familiar settings or misjudge distances and fall. Lewy body dementia seems to progress more rapidly than Alzheimer's; most LBD patients don't live as long. Certain antipsychotics and stimulants, and some Parkinson's and Alzheimer's medications, may make life easier for patients and their caregivers for a while.

According to Dr. James Galvin, a neurologist who specializes in LBD at NYU Langone Medical Center, "There's no way to repair the damage that's been done" to the brain. "All you're doing is slowing down the symptoms' progression without changing the underlying disease."

Some of the most common symptoms include decreased alertness and attention. Other symptoms may include:

Another common symptom is orthostatic hypotension or low blood pressure. This can cause dizziness and fainting. If there are indications and signs of stroke or vascular dementia, the diagnosis would then usually rule out the likelihood of LBD. 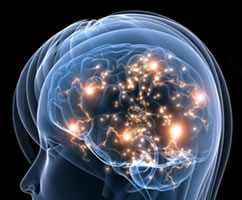 Cognitive Fluctuations: The patient may converse normally one day and be mute and unable to speak the next day. There are also fluctuations in attention, alertness and wakefulness.

Rapid Eye Movement (REM) Sleep Behavior Disorder: Vivid dreaming, talking in one's sleep, and excessive movement while asleep; may include hitting a bed partner. Because of the sleep disturbances, excessive daytime drowsiness may appear years before DLB is diagnosed. About 50% of patients have this symptom.