AIDS deaths have been progressively halted since the introduction of HIV drug therapy in 1994. Drug therapy medication halted HIV growth by inhibiting its ability to attach to white blood cells and from using the cell's RNA and proteins to replicate. This did not cure HIV patients, but it increased the lifespan of HIV victims because they were now able to maintain normal CD4 levels. Medication does have side-effects however, such as nausea and fatigue. Government resources were able to reduce deaths further by implementing national HIV reporting standards in 1985. This gave local officials the ability to coordinate HIV prevention efforts with the federal government.

Despite the existence of medication many underdeveloped countries cannot afford to supply their people with HIV medication without loans, subsidy cuts and donations. Modern countries are better off now in regards to HIV programs, but initially they weren't. People had to pay for HIV medication out of pocket in the beginning because insurance would not cover the costs; costs often exceeded two thousand dollars a month (insurance companies can no longer discriminate against HIV patients now). Sadly, despite the cost, medication was not effective for everybody, as it caused great discomfort for some and no change in others. HIV medication has since become cheaper, but countries, developed or not, have had to deal with patent laws (company control over costs), currency valuation (likelihood of a country being charged a higher or lower price), and customs regulators (which add costs due to import taxes) when dealing with medication prices and availability.

Worldwide availability of cost effective drugs has increased, due in part to universal healthcare systems and government efforts. Brazil managed to cut the price tag of generic HIV medication by 76% in its country in 2003. This was made possible by government subsidies and negotiated price cuts. Governments realized that it was cheaper to provide medication, than to treat an advanced case of HIV (BBC News, New Anti-HIV Drug Deal, 2003).

Before 1986, blood transfusions had a 95% chance of infecting someone with HIV if the donor's blood source was contaminated. In the US, reform limited this to 0%. Technically, the chance is 1 in 465,000. In 1999, 1% of the total AIDs population was a blood transfusion victim, due in part to stored blood from the early 1980's.

One percent represented 1 case out of a 100, and .10% represented 1 in a 1000. Each repeated encounter substantially increased the chances of infection occurring (Know Curriculum, 2007 Revision).

Twenty-five percent of HIV infected mothers passed HIV onto their children. With antiretroviral medication, and careful planning, this drops to 2%. C-sections can reduce these odds as well. This can increase the longer the mother has been an HIV host (Know Curriculum, 2007 Revision).

What Determines the Strength of HIV Transmission?

How Can HIV Be Prevented?

HIV infection can be stopped by educating people in infection control. Once infected, HIV cannot be cured by modern means. Here are common ways to prevent HIV progression:


What Doesn't Cause HIV?

Sweat, tears, feces, food handling and casual surface contact does not transmit HIV. HIV is a weak virus when exposed to the outside world, and usually dies within moments of being exposed to an outside environment. This means that people with HIV are virtually no risk to others, so long as attention is paid to cuts, protection (such as a condom), and risky behavior, such as drugs and heavy alcohol use (can lead to impaired judgment and unsafe sex).

Risks still exist if sores, cuts or other wounds are exposed to HIV. HIV is not passed by air, toilet seats or mosquitoes.

Note: Coincidently, mosquitoes have all of the delivery methods necessary, but the virus cannot survive long enough within the mosquito to matter.

Saliva has detectable traces of HIV; however, due to a harsh environment, HIV cannot infect someone without a significant amount of saliva. Even at a person's peak they will be unable to produce enough saliva to cause infection this way. Blood from sores and weak gums are more likely to allow transmission. Avoid sharing tooth brushes and razors, as these have been documented to transfer HIV. 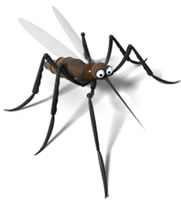