Not all centenarians practice good health habits. In fact, a small number of people, primarily men, make particularly poor health choices and yet live to be 100 or more. Clearly other factors affect length of life. What are some of these?

Older adults who are free from mental illness and who have an enthusiastically positive attitude toward life tend to live longer. The majority of the Georgia centenarians indicated that they were very happy with their lives despite their limitations (Purdy, 1995). Further, these cheerful centenarians indicated that they had adopted this attitude at an early age. Conversely, among the general population, those with the most severe depression tend to die at a younger age than those who are not depressed or who have milder depression. (Unutzer, Patrick, Marmon, Simon, & Katon, 2002). But why does mental well-being affect physical health? 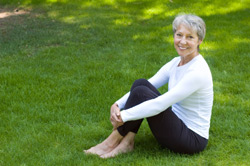 Good mental health supports healthy habits. Patients who are self-motivated are more likely to walk and to experience the benefits of exercise (Friis, Nomura, Ma, & Swan, 2003). Furthermore, the Georgia centenarians' nutritional levels were more the result of their mood than of any other factor (Purdy, 1995). Severe mental illness may interfere with basic self-care. A study of middle-aged and older schizophrenic women found that they were more likely to be obese, to smoke, and to neglect routine health screenings (Dickerson, Pater, & Origoni, 2002).

Physiological changes associated with mental health may also affect physical health. For example, one reason why depression may be related to dementia is that both are associated with a shrinking of the hippocampus, the portion of the limbic system that controls inhibition, short-term memory and spatial navigation. New research indicates that decreasing brain function in one area of the hippocampus, the dentate gyrus, is a main contributor to the normal decline in memory that so many elders experience. Researchers at Columbia University Medical Center looked at measures that typically change during aging, like rising blood sugar, body mass index, cholesterol, and insulin levels. The research found that the only factor that triggered a decline in dentate gyrus activity was a rise in blood glucose levels. Even for those without diabetes, these findings indicate that improving glucose metabolism through exercise, diet, or medication could be a way for some to stave off the normal cognitive decline that comes with age (Columbia University Medical Center, 2008).

Later in life chronic depression and Alzheimer's disease may be associated with vascular changes in the brain, as it often occurs in conjunction with heart disease, stroke, cancer, and Parkinson's disease (National Institute of Mental Health, 2003). When blood flow in the arteries to the brain is restricted over time, as might occur in atherosclerosis or cardiovascular disease, the brain does not receive enough glucose. This, in turn, begins a process that ultimately leads to the accumulation of sticky clumps of protein in the brain that appear to be a cause of Alzheimer's disease (O'Connor, et al., 2008).

The effects of personality are less clear. Those who lived longest and healthiest had:

Being mentally active seems to help stave off the dementia that robs so many elders of their independence. The Nun Study, a long-term research project involving a population of 678 Catholic sisters as subjects, found that idea density (a combination of vocabulary and reading comprehension) and grammatical complexity (the ability to write a complex sentence as a measure of working memory capacity) in early writings predicted an absence of dementia in later life. The effect was not related to educational level (Snowdon, 2001). In addition, subjects who performed mentally stimulating activities such as reading and crossword puzzles had less dementia (National Institute on Aging, 2002).

Those who have a happy home life and many friends are more likely to be healthy and long-lived. The Aging in Manitoba study found that those who participated in everyday activities with others had longer, happier, and healthier lives (Manec, 2003). "Talking on the phone, having someone to help, and having a caregiver" all contributed to greater survival among the Georgia centenarians (Georgia Centenarian Study, 2005).

Marriage is perhaps the most important relationship that people have. In fact, a healthy marriage was the best indicator for successful aging in the Harvard study (Vaillant, 2002). Married people are less likely to die early (Cooper, Harris, & McGready, 2002).

For some elders, knowing their social role within the family is the key to well-being. Hispanic elders in one study believed their health was good when they were happy with their family relationships and poor when they were not, regardless of their actual health status (Beyene, Becker, & Mayen, 2002).

A wider network of family and friends can ensure that elders' basic needs are met over the long term. Recent trends indicate that longevity is increasing among men at a faster rate than in women. This means that among married couples, women are not experiencing long periods of widowhood and the possibility of financial dependence as often as in the past. This, along with declining disability rates means that more elders have the physical independence, financial means and family network to remain in their own homes longer, and to choose home care or assisted living facilities over nursing home care as health deteriorates (Redfoot & Pandya, 2002). Additionally, those who are spouses or parents tend to take fewer risks (Bosworth & Schaie, 1977). Elders may be especially concerned that they not become burdens to their adult children and so be motivated to take better care of themselves.

Of those elders receiving home care approximately half feel distress at being suddenly dependent, resentment when a caregiver stops them from driving or performing other activities, embarrassment at needing assistance with personal care, and concern that they are a burden to their caregiver (Newsom & Schulz, 1998). Elders and caregivers who are also family members may find that this is an opportunity to reconnect with their loved one. Care giving and receiving is more likely to be a pleasant experience if the person receiving care had once provided help to their caregiver (Keefe & Fancey, 2002).

Those elders with larger circles of friends may be healthier because they have more opportunities for exercise. Many health promotion programs including walking clubs and group fitness classes encourage seniors to exercise by offering an opportunity to be with friends. Reasons elders most often cite for exercising are having fun, socializing, improving appearance, personal satisfaction, and health benefits (RoperASW, 2002).

Social groups that revolve around a common interest can also serve as informal support groups for those who are uncomfortable going to a bereavement or disease-specific support group. Pool or card rooms, sewing groups, book clubs, and similar activities provide opportunities for elders to gather and talk with understanding peers about what is troubling them. Social isolation may be a result rather than a cause of poor health. Those with vision, hearing, or mobility problems may find that they are no longer able to participate in activities they once enjoyed. The resulting social isolation may begin a downward spiral.