In this chapter you will learn more about tuberculosis patients, and how it impacts HIV patients in the workplace. This section will help you prepare, and minimize the coinfection capabilities of TB. Additionally, you will learn symptoms, common complications, and updates from the WHO regarding treatment prioritization.

Tuberculosis is currently the number one killer of HIV patients around the world. It is estimated to be in 4.3% of the US population, irrespective to HIV patients. It's primarily passed through moisture droplets, which are contaminated with mycobacterium expelled from the lung; laughing, sneezing, talking, and coughing are common transmission devices. TB can be present in other spaces in the body, such as the spine, but it is primarily found in the lungs.

TB has two stages: latent and active. In the latent phase people infected with TB harbor the bacterium while it grows into an uncontrollable level in the host's lungs. In the active stage patients become violently sick and are able to pass the disease

In the active stage, patients begin to exhibit a range of symptoms, such as:

TB has an easier chance to infect immunocompromised patients, such as those with HIV, and the elderly, patients with an underdeveloped immune system (such as a baby), people with chronic stress, fatigue and malnutrition, or those at risk of complications, like cancer and diabetes patients.

Those with HIV often end up dying from conditions such as TB, pneumonia, bacteremia, cerebral toxoplasmosis, and pneumocystis jirovecii pneumonia, as well as fungal infections and meningitis.

HIV and Tuberculosis Stats in the US

Here is a brief overview of why HIV and TB co-infection statistics are encouraging broad changes to diagnosing policy:

Over 34 million people are believed to be HIV infected, and a third of that infected with TB. Most cases of TB come from impoverished countries where HIV and TB are common, and treatment for it is scarce. HIV patients are 21-34 times more likely to develop active TB if they are co-infected (WHO, WHO Policy on Collaborative TB/HIV Activities, 2012).

The CDC and the WHO have taken proactive steps in order to curtail the death rates of TB co-infections. For instance, cooperation among different health agencies is being used to develop correlations between risk groups and testing results. Policies are shifting in favor of testing most people with TB for HIV, and vice versa.

In 2012, the WHO released a summary highlighting resource policies they would be using for future TB outbreaks. Examples of this include treating and counseling patients with the earliest signs of symptoms (coughing).

HIV mothers, children, drug users, and prisoners are currently priority targets. A unique strategy that has shown remarkable results is the implementation of the ART system.

Anti-retroviral therapy (ART) is a system that distinguishes the need to test patients, based on the health, and likelihood of TB, and TB co-infections. With preventative antiretroviral medication for example, HIV patients can reduce the odds of getting a TB coinfection as a result of their compromised immune system. Other parts of the system use standard precautions for facilities (proper ventilation for TB, limited contact with other high risk patients), proposed diagnostic criteria, and types of treatment and preventative programs for TB and HIV (HIV awareness, protected sex, identifying symptom signs of TB, and when to seek treatment).

In short, by understanding the population, and the rate of infection, you can decisively plan and adjust resources to reduce the rate of TB and HIV infections. Surveys find that government programs have a higher rate of success when their programs focus on harm reduction services, better prison care management, maternal/child care, and how they introduce routine HIV and TB test screening. 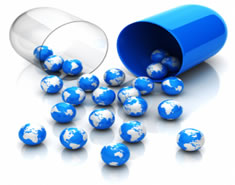 To decrease co-infections you can use the following criteria in your own medical facility:


Treatment Based on Presence or Absence of Symptoms

Clinical facilities should base their priority treatment criteria on the presence or absence of four major symptoms: cough, fever, weight loss, and night sweats.

One agency should oversee the implementation and results of the TB and HIV co-infection effort, as opposed to individual action (larger scale actions prompt more uniform action to keep results consistent).

Organizations should implement new policies in favor of relocating HIV healthcare workers away from TB patients.

Over 170 countries now use the ART system to decrease the number of TB and HIV cases around the world. Use of the system has become commonplace since 2010. The policy is expected to be reviewed in 2017 in respects to progress and changes.

The WHO implementation of the ART system has achieved remarkable coinfection prevention results:

Right now it is believed that TB infection in HIV patients can be reduced by 50% when ART and ISP systems are used on patients with CD4 counts greater than 350 cells/mm3. This is currently being debated for the next policy update (Statistics provided by the WHO, WHO Policy on Collaborative TB/HIV Activities, 2012).