Insulin is the most efficient drug to use when the goal is to bring blood glucose down. However, that advantage also represents the primary disadvantage in that hypoglycemia, sometimes profound and life-threatening, is a side effect of insulin. The other side effect associated with the use of insulin is weight gain.

Treatment programs for DMT1 have moved away from using the intermediate-acting insulins, NPH and Semi-Lente as one insulin injection per day regimens which were the standard of care after these and the long-acting insulins, PZI and Ultra-Lente were created. Insulin regimens for treatment of DMT1 more often include one injection of basal (peakless) insulin and several injections of rapid- or short-acting insulin, combinations of intermediate- and rapid- or short-acting insulins, or continuous subcutaneous insulin infusion (CSII) – insulin pump. In fact, in 2014 the American Diabetes Association recommended that treatment for most people with DMT1 should include an injection of basal insulin (at bedtime or breakfast) and multiple daily injections of rapid- or fast-acting insulin every day, or by CSII. The effect is more constant and closer-to-normal blood glucose levels (better control) than is possible with daily (or twice daily) injections of an intermediate-acting insulin (American Diabetes Association, 2014). These recommendations continue in the most current recommendations (American Diabetes Association, 2018).

However the potential for hypoglycemia is also greater with this mode of treatment due to the intensified effects of multiple peak times of insulin activity associated with rapid- or fast-acting insulin. Consequently, the risks and benefits of carbohydrate control -- blood glucose control that attempts to produce blood glucose levels as close to non-diabetic levels as possible) -- must be carefully assessed by the health care provider before recommending such a regimen. Such tight control is generally not recommended for young children, people with heart conditions, or the elderly, and is certainly risky for those who have become hypoglycemia insensitive. (See content later on tight control.)

With the approval by the Federal Drug Agency (FDA) of the peakless insulin glargine in 2000, the patient was able to receive a steady dose of basal insulin for a 24-hour period. Supplementation with rapid- or short-acting insulin to cover carbohydrate intake throughout the day offered the possibility of blood glucose control both of basal needs and of needs created when the individual ingests food. Insulin detemir, the second peakless basal insulin, was approved by the FDA for use in 2005. It was promoted as a daily or twice-daily insulin (depending on the actual dose injected) with a small peak of activity 6-8 hours after subcutaneous injection. Insulin detemir offers an advantage over insulin glargine in that it is associated with less weight gain (Garg, 2010).

Is there a predictable time when hypoglycemia might occur when using insulin glargine? Because insulin glargine is considered a peakless insulin, there is no predictable time in which a low blood glucose could be expected. Regular and frequent blood glucose determinations by the person using this type of insulin will provide the best information about effectiveness of the dose – whether it is too much or too little.

Typically, insulin glargine is injected at bedtime, though there is no set rule about this; it can be injected first thing in the morning, provided the next day's dose is administered 24 hours later (or, if twice per day dosing is used, 12 hours later). A fasting blood sugar assessment would be an appropriate time to assess for blood glucose control, but only if the injection of insulin glargine had been made at bedtime the night before. If fasting blood glucose assessments and/or A1C levels while on insulin glargine are consistently greater than goal, consideration should be given first to increasing the dosage. If unsuccessful in obtaining glucose control, pre-prandial injections of rapid-acting insulin might be considered, with appropriate precautions initiated for hypoglycemia.

A factor to consider in relation to insulin's effect on blood glucose is the timing of insulin activity. There are four different types of insulin based on times of onset, peak, and duration: rapid-acting, fast-acting, intermediate-acting, and basal. Different sources give different periods of time for each of these, and individuals behave differently from the textbook case, so it is best to remember ball park figures when learning these facts about insulin. The chart in Appendix C gives good estimates. Thus, hypoglycemic reactions related to insulin activity can be predicted, somewhat, and thereby prevented or treated effectively when they first develop.

Rapid-acting insulin (e.g. insulin lispro, insulin aspart, or insulin glulisine -- sometimes referred to as ultra rapid-acting), begins to work within 10-15 minutes of subcutaneous injection. Its activity peaks in 30-60 minutes, and it has a duration of activity of three to four hours. This is the category of insulin that is used in insulin pumps which provide subcutaneous insulin 24 hours/day and include a computer to calculate meal-time insulin dosages to administer before meals based on estimates of carbohydrate intake.

Regular insulin is also reffered to as fast-acting insulin. While faster-acting than intermediate-acting insulin, it is not as fast-acting as the rapid-acting category. Regular insulin provides a relatively quick response to blood glucose, but lasts a comparatively short time. Its onset of action is about 30 minutes after subcutaneous injection. Regular insulin's activity peaks in two to four hours, and it has a duration of activity of five to seven hours. The first insulin – made available as "Isletin" in 1923 by Eli Lilly and Company after insulin was discovered in 1921 – was a quick and short-acting soluble or regular insulin that had to be injected intramuscularly several times each day. This type of insulin was crude and impure. Pain and abscesses were common. Soon, the public was clamoring for relief from the frequent injections required with this type of insulin, and scientists discovered ways to combine insulin with other elements to provide a sustained release, thereby eliminating the need for multiple injections in every 24-hour period. In 1936 protamine zinc insulin (PZI, an ultra-long-acting insulin) was introduced, and in 1954 the intermediate-acting insulins (Lente and NPH) were introduced.

Impurities in early insulin were mainly due to pancreatic peptides which were present in tiny concentrations. Researchers in Denmark produced a purer type of insulin: monocomponent insulin, and other highly purified insulins were made. When those in Denmark began to capitalize on these improved products, the Americans reacted by producing human insulin, a genetically engineered insulin which now dominates the market. Previously, insulin had come from animal sources, mainly cattle in the US and pigs in Denmark. These differ from each other in one to three amino acids but are both effective in reducing blood glucose in humans. Human insulin, however, is identical to the insulin made by the human body, and as such, stimulates no rejection or allergy. 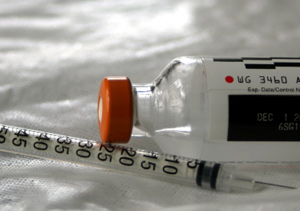 Such rapidity of onset must be carefully considered when ultra rapid-acting insulin is injected, especially in relation to the current blood glucose level. Some people accommodate this when pre-prandial glucose readings are low by taking their injection during or immediately following the meal.

Combination insulins are available as well. Intermediate-acting insulin and Regular insulin can be mixed to produce a commercially available insulin in one vial which contains a certain percentage of each. For example, Novolin 70/30® contains 70 percent intermediate-acting insulin and 30 percent Regular insulin. Administration of this insulin warrants careful monitoring due to dual onset, peak, and duration times associated with the two insulins.

Intermediate-acting and mixed insulins have a characteristic cloudiness due to added elements. These insulins must be carefully rolled (shaking is too disruptive to the delicate protein molecules) to provide an even mixture prior to drawing up for administration. Should particles be present in the solution, the insulin should not be used. Refrigeration is necessary for storage of insulin, but is not required for insulin used on a daily basis. Extremes of temperature should be avoided, however: Insulin should not be frozen nor should it be subjected to excessively high temperatures.

The site of the injection can also be significant. Repeated injections in the same area can produce lipoatrophy (a pitting condition in the subcutaneous tissue), lipohypertrophy (a building up of subcutaneous tissue), and scarring, resulting in delayed absorption of insulin into the blood stream in the latter two cases. One must consider that rapid absorption will probably occur when new sites are used. A related problem is the development of a negative body image due to the disfiguring effects of these conditions.

This problem should be explained when teaching about insulin injections and the need to rotate sites. A reliable method of site rotation which makes use of subcutaneous tissue in the upper arms, abdomen, thighs, and buttocks must be developed.