The etiology of this disorder continues to be a priority for members of the medical community. The word "fibromyalgia" is a combination of the Latin root "fibro" meaning connective tissue and the Greek term "myo" for muscle and "algia" for pain. Fibromyalgia is referred to as a syndrome rather than a disease because it is a simultaneous collection of symptoms that aren’t related to a single identifiable cause.

Fibromyalgia is a physical disorder, characterized by the chief complaints of: musculoskeletal pain throughout the body, fatigue and sleep disturbances. These three conditions are frequently accompanied by symptoms such as:


The three hallmark symptoms of pain, fatigue and sleep disturbances are commonly accompanied by the associated feelings of apprehension, anxiety and stress. These are the emotional components that surround the physical symptoms caused by this debilitating condition. Moreover, this unfortunate triad can frequently lead to a deep-seated feeling of depression (Johnson et al., 2009). 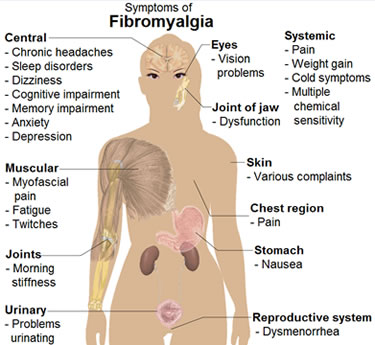 The exact causes of fibromyalgia remain a mystery. The etiology of the disorder continues to be the subject of ongoing medical research. The National Fibromyalgia Association reported that a recent study has demonstrated that genetic factors may cause people to be susceptible to fibromyalgia. Current research is also examining defects in the central nervous system through imaging studies. The studies are investigating how the brain and spinal cord process pain (Peterson, 2007).

Research is also examining the role of biochemical imbalances that are a factor in the dysregulation of physiological abnormalities of fibromyalgia patients. The abnormality of the body’s neurotransmitters is thought to be involved in the pathogenesis of the disorder. Evidence suggests that people with fibromyalgia have low levels of cortisol, serotonin, growth hormones and norepinephrine. Increased levels of substance P in the spinal cord are also present in fibromyalgia patients.
Serotonin in the brain contributes to the regulation of mood and well-being, while norepinephrine also regulates mood and stimulates the body’s autonomic nervous system in response to stress. Substance P is a neurotransmitter that intensifies the perception of pain. These neurotransmitters in the brain act as messengers that transmit signals from a neuron to a target cell across a synapse. The combination of low serotonin and high substance P levels increases the body’s hypersensitivity to pain (Peterson, 2007).

Scientists also associate the onset of fibromyalgia with traumatic injury, such as an accident, or illness that incites an ongoing physiological issue within the body. Risk factors also include chronic stress, female gender, and a family history of fibromyalgia.

Research has shown that most people diagnosed with fibromyalgia are middle-aged, but symptoms are frequently present earlier in life. Additionally, approximately 80% to 90% of people with this disorder are women (NIAMS study, 2009).