Learning from the Oldest Old

Too often we think of older age as a period of physical decline rather than a time to enjoy the fruits of a long life. Many elders themselves believe that age brings mainly unhappiness and poor health. More than half of the elders responding to one survey associated old age with depression, dependency, reduction in sexual ability, aches and pains, trouble sleeping, less energy, and unattractiveness (Sarkisian, Hays, & Mangione, 2002). However, later life can also mean having more leisure time and the wisdom to focus on what is truly important. Of course, enjoying these benefits of aging depends on also having good health and independence.

"There is an unspeakable dawn in happy old age."

Fortunately, we have begun to learn why some people seem to be contented and healthy into their 90's and 100's while others die in late middle age. Some scientists believe that human life expectancy can be extended into the hundreds of years, while others feel that the average lifespan will never extend much beyond current levels (Wright, 2003). Healthy patients are divided into two groups. The larger of the two groups is comprised of those individuals who practice good health habits and make wise choices. On average, good habits can potentially add approximately eight years to a lifespan, and most individuals in this group retain their good health, living into their late 80's. Another smaller group has a genetic predisposition to long life, opening the possibility of living to the age of 100 or more. These people frequently, but not always, have healthy lifestyles (Perls & Terry, 2003). Looking at the characteristics of the long-lived in both of these groups tells us many things that you need to know to take the best possible care of your patients. 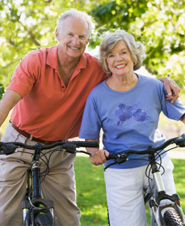 Studies of the oldest old, the 100+ group, show that they do not have the same number of illnesses as other elders. Many display great frailty only at the very end of life. A group of Georgia centenarians had about the same number of medications and instances of ill health as younger elders (Purdy, 1995). Subjects in the New England Centenarian Study had a mean of only four chronic diseases, 3.4 medications, and 6 hospitalizations per year (Hitt, Young-Xu, Silver, & Perls, 1999). One in five had no serious diseases even at age 100 (Friedrich, 2002). Nine out of ten lived independently in their homes to an average age of 92 (Perls, n.d.).

Those who live longest also tend to avoid diminished mental capacity longer. Among the centenarians in the New England study, about one-third had no dementia (Friedrich, 2002). The Georgia study found that, while most of their subjects demonstrated poorer performances in most cognitive functions, if they used their life experience for problem-solving they functioned as well cognitively as those in their 60's or 80's (Georgia Centenarian Study, 2005).

Research shows that those who live to very old ages frequently practice basic healthy habits. Three studies have found that those subjects who maintained a healthy weight, avoided weight loss diets and large fluctuations in body weight tended to live longest (Georgia Centenarian Study, 2005; Vaillant, 2002; Perls, n.d.). With regard to nutrition, the Georgia centenarians ate breakfast more regularly and consumed about 20-30% more Vitamin A and carotenoids from food than younger people, even though the number of calories and amount of fats consumed were similar. Interestingly, the Georgia centenarians tended to consume more whole milk rather than lower fat alternatives, and tended to make their food choices with little regard for dietary cholesterol (Georgia Centenarian Study, 2005). Both the Georgia study and one conducted at Harvard University found a correlation between moderate exercise and longer life (Vaillant, 2002).

Moderate Tobacco and Alcohol Use

It is not surprising that most of the subjects in the Georgia Centenarian Study, the New England Centenarian Study, and the Harvard study either never smoked or did not have a long history of smoking (Georgia Centenarian Study, 2005; Vaillant, 2002; Perls, n.d.). They also tended toward moderation in the use of alcohol (Georgia Centenarian Study, 2005; Vaillant, 2002). This is especially important given that 9% of those 55 and older engage in binge drinking (Substance Abuse and Mental Health Services Administration, 2001), while 17% of elders have some form of alcohol or medication management problem (Substance Abuse and Mental Health Services Administration, 1998). Medication mismanagement can include addiction to prescription medications, failure to take medications as prescribed (either intentionally or unintentionally), and having adverse drug interactions.

The effects of substance abuse can be more dangerous for older adults than for other age groups. Even elders who don't binge may find that they tolerate the effects of alcohol and medications less well than when they were younger (Substance Abuse and Mental Health Services Administration, 1998). Both alcohol and medication abuse may be misdiagnosed as dementia or other ailments associated with later life (Blow, 1998). Additionally, alcohol can interact with many prescription medications, and the more medications elders take, the more likely they are to have life-threatening adverse reactions.