The most common signs and symptoms of frontotemporal dementia involve extreme changes in behavior and personality and can include:

Patients with FTD may illustrate varying degrees of increased sexual desire. The bvFTD type is uniquely associated with hyper-sexuality; it is more than just cognitive impairment with frontal disinhibition but also involves alterations in sexual drive. A common issue is having extramarital affairs, or saying and doing inappropriate things in front of teenage children and their friends. This person may start shoplifting, and misbehave in other ways. They may laugh at a funeral and take food from another person’s plate, especially cookies or bread products. These kinds of behaviors devastate families, especially when it is so out of character from that persons’ previous personality.

Some subtypes of frontotemporal dementia are marked by the impairment or loss of speech and language difficulties.

Primary progressive aphasia, one subtype, is characterized by an increased difficulty in using and understanding written and spoken language. They often have trouble finding the right word to use in speech or naming objects. People with aphasia talk slowly and may have memory difficulties as well.

Damage to neurons in the frontal and temporal lobes of the brain cause the lobes to atrophy. This causes ongoing and progressive losses in thinking, behavior problems, emotional issues, trouble communicating and difficulty in walking, meal preparation, driving, working, and performing other daily activities. Rarer subtypes of frontotemporal dementia are characterized by problems with movement, similar to those associated with Parkinson's disease or amyotrophic lateral sclerosis (ALS). 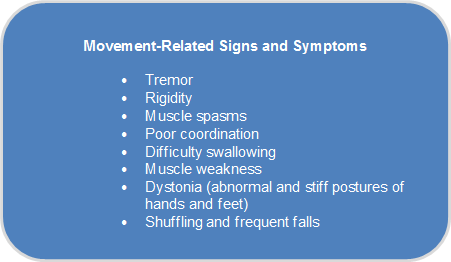