How to Diagnose Diabetes

Blood glucose levels are used to diagnose diabetes according to the following recommendations by the American Diabetes Association:


The following chart shows how the results of the FBG and the two-hour post-load BG (during the OGTT), and the hemoglobin A1c are used to diagnose diabetes (provided abnormal results on the same tests are obtained on two different days).

The American Diabetes Association recommends that testing for diabetes should be performed on all adults who are overweight (BMI = 25-29.9 kg/m2) or obese (BMI > 30 kg/m2) and have one or more risk factors for diabetes (P. S 16). (See Risk Factors for Diabetes below). However, if no risk factors are present, the American Diabetes Association recommends testing for pre-diabetes and diabetes starting at age 45 years. If the results at that time are within normal limits, the recommendation is to repeat the testing at three-year intervals, or more often if test results and/or risk status warrant it (ADA, 2018).

If, on the other hand, results are diagnostic of pre-diabetes, interventions are recommended. Such interventions include lifestyle changes (revisions in dietary intake and regular exercise) and starting metformin, if not contraindicated in the patient (ADA, 2018).

Studies cited in the "Standards of Medical Care in Diabetes – 2014" demonstrated that individuals with pre-diabetes were able to "decrease the rate of onset of diabetes with…intensive lifestyle modification programs…([-- an approximate] 58% reduction after 3 years) and [the use of] pharmacological agents" (ADA, 2014, p. S20).

Due to the significant increase in obesity among children over the past years (and the associated increase in the number of children diagnosed with DMT2), the American Diabetes Association (2014 and 2018) recommends testing (using the hemoglobin A1c) for pre-diabetes and DMT2 in children (age 18 and younger) if the child is overweight (BMI > 85th percentile for age and gender, weight by height is > 85th percentile, or weight > 120% of ideal weight for height), and has any two of the risk factors listed below:

Because the rates of DMT1 are increasing in the United States as well, the American Diabetes Association recommends screening relatives of individuals with DMT1 for islet autoantibodies. Positive results would provide for follow-up of individuals and as such could increase the chance for earlier identification of DMT1 before the development of ketoacidosis (ADA, 2018, pg. S17).

As explained in the American Diabetes Association's Standards of Medical Care in Diabetes -- 2018, individuals with one or more of the following should be considered at risk for the development of DMT2:

*Acanthosis nigricans (AN) is a dermatologic condition characterized by symmetric brown thickening of the skin – of predominantly the neck and the axillae, the back of the neck and the groin. It is associated with insulin resistance and (consequently) hyperinsulinemia which occurs as a natural response to insulin resistance. As such, it may be a predictor of DMT2. Over time, the darkened area may become thickened and develop a leathery or warty surface. It should be considered a redflag for the presence or development of prediabetes or DMT2 in obese children and adults. It should also be noted, however, that the sudden appearance of AN after the age of 50 should be addressed immediately as such occurrences may be related to adenocarcinoma of the stomach (Trace, 2013). Prompt follow-up of this condition is warranted.

In 2018, the American Diabetes Association added the following recommendations for screening for diabetes among asymptomatic overweight and obese children and adolescents for diabetes - Overweight or obese individuals under the age of 18 plus at least one of the following risk factors:

Any additional clinical evidence of metabolic syndrome (the clinical condition reflected by the presence of insulin resistance, hyperlipidemia, and hypertension) should be pursued because the presence of any of these is a risk factor for the development of DMT2. That said, waist circumference alone has been found to be a predictor of metabolic syndrome and of DMT2 (Janiszewski, Janssen, & Ross, 2007; Wang, Rimm, Stampfer, Willett, & Hu, 2005).

The American Heart Association defines metabolic syndrome as a group of risk factors that lead to the development of atherosclerotic heart disease and increase one's risk for the development of DMT2. The risk factors include hypertension, elevated blood glucose, elevated triglycerides and low-density lipoproteins (LDLs) as well as low levels of high-density lipoproteins (HDLs) in the blood. A clinical red flag is increased waist circumference in men greater than 40 inches (102 cm), and in women greater than 35 inches (88 cm) (American Heart Association, 2015). 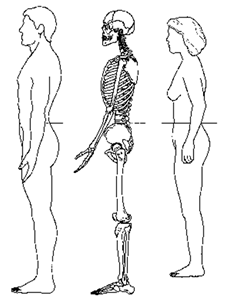 In a study reported in Diabetes Care in 2007, the authors reported "WC [waist circumference] predicted diabetes…The findings lend critical support for the recommendation that WC be a routine measure for identification of the high-risk, abdominally obese patient" (Janiszewski, Janssen, & Ross, 2007, p. 3105). In this study, waist circumference was measured during minimal respiration to the nearest 0.1 cm at the level of the iliac crest.

To determine waist circumference, the measuring tape should be placed at the level of the iliac crest. The measurement should be made at the normal minimal respiration. High risk* is considered:

*This measurement is useful in predicting risks as described above in all adult ethnic or racial groups, but only in those with a BMI of less than 35 and those who are at least five feet tall (National Heart, Lung, and Blood Institute of the National Institutes of Health (NHLBI), 1998).

The findings of the Janiszewski, Janssen, and Ross (2007) study reinforced the conclusions of a previous study published in 2005 which compared measurements of abdominal adiposity and overall obesity with regard to predicting risk of DMT2: "In conclusion, the present study provides further evidence that abdominal adiposity measured with the use of WC [waist circumference]…is a strong risk factor for type 2 diabetes, independent of overall obesity assessed by BMI [body mass index]" (Wang, Rimm, Stampfer, Willett, & Hu, 2005, p. 562).

The cut points for WC measurements in the Wang, Rimm, Stampfer, Willett, and Hu (2005) study were exactly the same as those recommended in the 1998 NHLBI publication above.

Unfortunately, inconsistency exists relative to measuring waist circumference among health care providers. Different anatomical landmarks have been used to determine the exact location for measuring WC in different clinical studies, including: 1) midpoint between the lowest rib and the iliac crest; 2) the umbilicus; 3) narrowest (minimum) or widest (maximum) waist circumference; 4) just below the lowest rib; and 5) just above the iliac crest. The specific site used to measure WC influences the absolute WC value that is obtained (Klein et al., 2007, pg. 1648).