Overall, insulin functions as an anabolic agent because it builds the body up as opposed to breaking it down (catabolic). It is essential for the metabolism of glucose for energy by the cells.

Another hormone secreted by the beta cells of the pancreas is amylin. The function of this substance is to aid in the absorption of glucose by slowing the emptying of the stomach and promoting satiety through chemical receptors in the hypothalamous. In addition, amylin inhibits the secretion of glucagon by the liver.

In these ways, blood glucose levels are maintained within a normal range (homeostasis). Diagram 1 illustrates the normal relation¬ships among blood glucose, insulin, amylin, glucagon, and other selected hormones in the body: 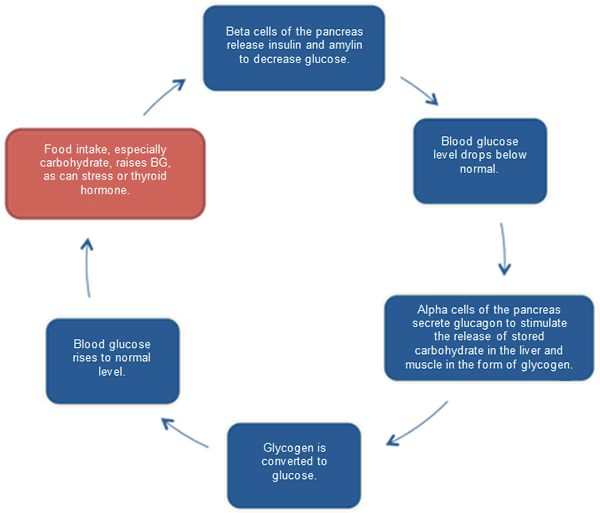 In 1964, scientists observed that plasma insulin levels rose more rapidly and for a more sustained period of time after the oral ingestion of glucose than after the intravenous infusion of the same amount of glucose. Such observations suggested that the gastrointestinal system played a role in glucose metabolism by stimulating insulin production. A study reported in the Journal of Clinical Endocrinology in 1964 verified these findings (Elrick, Stimmler, Hlad, & Arai, 1964) as did subsequent studies reported in the literature (McIntyre, Holdsworth, & Turner, 1965; Perky & Kipnis, 1967).

Further study led to a fuller understanding of the complexities of the underlying pathophysiology of type 2 diabetes and a clearer grasp of the relationship between hormones found in the small intestine (enteroendocrine cells) (Trujillo, 2006) and plasma insulin levels. The hormones discovered were labeled "incretins" – e.g. glucagon-like peptide-1 (GLP-1) and dipeptidyl peptidase-4 (DPP-4). Dysfunction of one or more of these was found to be related to the development of type 2 diabetes. However, it was not until 2005 when the first medication, exenatide – a GLP-1 receptor agonist -- was approved by the Federal Drug Agency (FDA) to treat type 2 diabetes. (More about this later.)

As studies continued, researchers noted that amylin – the hormone secreted along with insulin by the beta cells in the pancreas – was depleted in persons with DMT2 and virtually absent in those with DMT1. Accordingly, in 2005, the amylinomimetic (means "imitates amylin") drug, pramlintide was approved by the FDA for treatment of both types of diabetes. Pramlintide slows emptying of the stomach and postprandial (refers to the period after a meal) glucagon secretion, and increases satiety. These effects can lead to weight loss (U.S. National Library of Medicine, Medline Plus, 2013).

Other hormones in the body influence blood glucose. They are adrenocorticotropic hormone (ACTH) and epinephrine which are produced in response to stress, and which indirectly elevate the blood glucose. Consequently, emotional stress can result in elevated blood glucose levels. Chronic stress has been shown to be related to poor glucose control and thereby an increased incidence of complications.

Diabetes mellitus is a condition resulting from a relative or absolute lack of insulin activity in the body. It is not simply always too little insulin, and it is certainly not because the individual ate too much candy (a common misconception).

The graphs below show the typical glucose response to ingestion of food in the non-diabetic and the person with uncontrolled/undiagnosed diabetes mellitus. (Caution: The blood glucose values shown are not to be taken literally, but are used to reflect trends. Keep in mind the normal values of blood glucose in the fasting and postprandial states as you review the graphs). With insufficient insulin activity (DMT2) or, in the case of DMT1, an absolute lack of insulin, the blood glucose (BG) remains at excessively high levels. Like insulin, the hormone, amylin, normally secreted by the beta cells of the pancreas, is completely absent in DMT1. 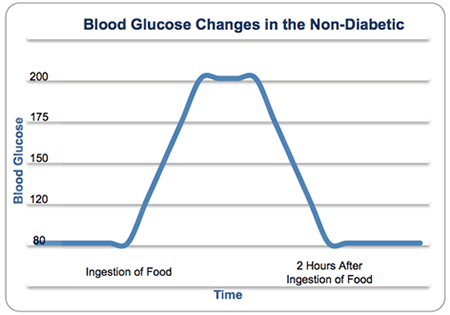 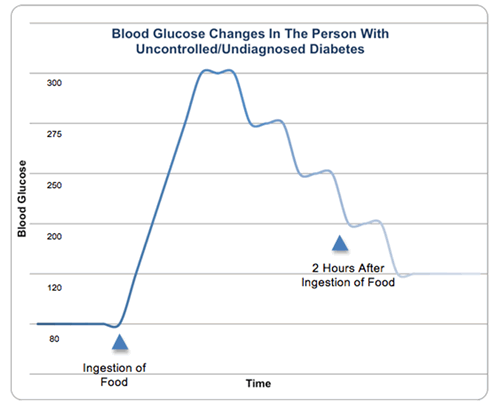 Understanding the function of amylin (see Normal Physiology), one can appreciate the consequences in terms of blood glucose changes when amylin is absent (as in DMT1) or of insufficient quantity (as in DMT2). The kidneys attempt to excrete the excess glucose in the urine leading to profound loss of fluid and insatiable thirst. Because the body cells cannot make use of the blood glucose due to insufficient (or absent) insulin, the metabolic processes effectively recognize a state of starvation and resort to the breakdown of fat (primarily, and eventually of) protein, and the hepatic production of glucose to meet energy needs. (Please compare the graphs on the next page to one another).

Uncontrolled/undiagnosed diabetes is a life-threatening problem. Until 1921, when insulin was discovered by Dr. Frederick Banting and Charles Best (a medical student who was working with Dr. Banting), the diagnosis of diabetes (now identified as DMT1) meant certain death. Death came slowly, essentially from metabolic acidosis and starvation, despite the presence of adequate food. The body simply broke itself down in an attempt to meet its energy needs. (See Best, 1964 for the exciting story of the discovery of insulin told first-hand by one of the discoverers!)

These signs generally appear together, but may not all be present simultaneously.

Note: These characteristics may present themselves in DMT2 as well except that weight loss typically does not occur. This is due to a basic difference between the underlying pathology of DMT1 and DMT2. A primary symptom of undiagnosed DMT2 is the complaint of fatigue.

Capitalizing on your current understanding of normal human physiology, try to relate each of the above signs to the primary cause of the problem, insufficient insulin activity. Ask yourself, in the presence of hyperglycemia, why one might have excessive thirst, urination, hunger, and/or weight loss? Then, go on to read about it below.

The three "polys" can be explained from a pathophysiological basis as a direct response to the hyperglycemia: Because of the high concentration of glucose in the blood, water is drawn by osmosis from the cells into the blood thereby creating cellular dehydration and simultaneously increasing the blood volume. The excessive blood volume leads to excess urinary excretion (polyuria). The urine which is excreted has a high concentration of glucose (glucosuria -- a fifth sign) reflective of the high glucose concentration in the blood which exceeds the kidney's ability (threshold) to reabsorb the glucose back into the blood.

The following diagram illustrates conditions associated with glucosuria: (Caution: the figures used are examples, only. Renal threshold is individually determined. There is also evidence (Miller, 1986) that renal threshold levels are inconsistent with blood glucose levels due to the effects of disease, age, and certain drugs.) 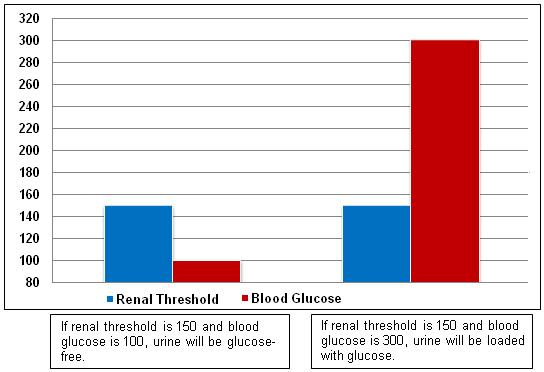 The resultant dehydration leads to profound, insatiable thirst. If untreated, it can lead to severe dehydration, shock, and death.

The weight loss which can accompany uncontrolled/undiagnosed DMT1 is due to the virtual total catabolism of the body which occurs in an environment without insulin activity. What does the body do when it cannot meet its energy needs via glucose? The cells participate in a type of metabolism in which (initially) fats are broken down by a process called lipolysis, and (eventually) proteins are catabolized to produce glucose, a process called gluconeogenesis. (Note: This is the desired effect of those who purposely starve themselves to reduce weight. However, the results in the uncontrolled/undiagnosed diabetic are profound and can be fatal due to the high concentrations of the by-products of fat metabolism). This further increases blood glucose, raising the tonicity of the blood, and adding insult to injury. However, the body knows only that it is starving and is forced to meet its energy demands in any way it can. Polyphagia results from this faulty stimulus, further increas¬ing blood glucose.

Breakdown of body proteins for energy leads to severe negative nitrogen balance, tissue wasting, and weight loss -- much more protein is being broken down than is being taken in through what is eaten. Growth cannot occur in this metabolic state and resistance to infection is reduced as well. In addition, the breakdown of fats results in the production of ketones and fatty acids, both of which markedly reduce the pH of the blood leading to metabolic acidosis. Ketonuria and an acidic blood pH are the sixth and seventh signs of uncontrolled/undiagnosed DMT1.

The kidneys compensate as long as they can by excreting hydrogen ions, in part, but if the aberrant metabolic process persists the kidneys cannot satisfactorily continue to maintain the normal range of blood pH. The individual subsequently develops diabetic ketoacidosis. The lungs respond to the acidic condition by trying to blow off more and more CO2. The resulting respiratory pattern is a characteristic deep, rapid breathing (Kussmaul respirations). The presence of ketones is noted by the fruity odor to the breath. See the chart in Appendix A to review the pathophysiology of uncontrolled/ undiagnosed diabetes.

The person who has reached this stage of uncontrolled/undiagnosed diabetes is in serious trouble and needs immediate, intensive care. Otherwise, profound metabolic acidosis will develop and, most likely, fatal coma will ensue.

In summary, the person in the early to middle stages of uncontrolled/undiagnosed diabetes mellitus due to an absolute lack of insulin (DMT1) will probably have the four cardinal signs as well as glucosuria and ketonuria. In addition, the blood pH will be lower than normal. (If untreated, the pH will drop to dangerous, lethal levels as metabolic acidosis ensues.) There may be complaints of fatigue and lethargy, muscle cramps due to electrolyte changes, and difficulty sleeping through the night (due to the frequency of the need to drink and urinate) -- symptoms (subjective indications) of diabetes when in conjunction with the above signs. This person may be more prone to illnesses than the average person and have skin rashes and/or infections which do not resolve. In undiagnosed DMT1 considerable weight loss may occur despite a voracious appetite. (Note: The person with uncontrolled/undiagnosed diabetes due to a relative lack of insulin (DMT2) may have few (if any) subjective indications of a problem. The primary subjective complaint is often fatigue).

A hyperglycemic environment within the body provides an excellent medium for the growth of microorganisms. Consequently, females with uncontrolled/undiagnosed diabetes may be prone to stubborn vaginal infections due to the presence of a high sugar concentration in the vaginal mucosa. Repeated vaginal infections in a patient should raise the health care provider's suspicions of diabetes.

The person in the late stages of uncontrolled/undiagnosed DMT1 (i.e. diabetic ketoacidosis (a specific type of metabolic acidosis) or diabetic coma) will most likely exhibit each of the above symptoms, and will be in a comatose state. This does not typically occur as a consequence of uncontrolled/undiagnosed DMT2, however, due to a fundamental difference in the ongoing pathophysiology that occurs in this condition.