Diabetes is a chronic disorder predominantly of carbohydrate metabolism. Disorders of carbohydrate metabolism, however, ultimately influence protein and fat metabolism. Data collected in 2015 documented that there were an estimated 30.3 million people of all ages in the United States (9.4% of the population of the United States) who had all types of diabetes. Approximately 7.2 million of these (28.3%) were unaware of their condition and therefore, undiagnosed (National Center for Chronic Disease Prevention and Health Promotion-Division of Diabetes Translation, 2017).

The Centers for Disease Control and Prevention (CDC) indicated that in 2015 approximately 84 million Americans had pre-diabetes (FBG 100-125 mg/dL or A1c of 5.7% - 6.4% on two separate days), a condition which, if left untreated is likely to lead to diabetes. Like the above, a large percentage of these are unaware of their condition (National Center for Chronic Disease Prevention and Health Promotion-Division of Diabetes Translation, 2017). "Total diabetes prevalence (diagnosed and undiagnosed cases) is projected to increase…to 21% of the US adult population by 2050" (Boyle, Thompson, Gregg, Barker, & Williamson, 2010, pg. 1).

From the National Center for Chronic Disease Prevention and Health Promotion-Division of Diabetes Translation (2017):

Note the statistics published below in 2017 for the number of people diagnosed with diabetes. This reflects an "epidemic" of diabetes in this country! Can you think of explanations for this?

"Recently, type 2 diabetes has increasingly been reported in children and adolescents, so much so that in some parts of the world type 2 diabetes has become the main type of diabetes in children [as opposed to type 1 diabetes]. The global rise of childhood obesity and physical inactivity is widely believed to play a crucial role. Healthy eating and lifestyle habits are a strong defense against the disease" (WHO, 2017, What are the risks of diabetes in children?).

In a study published in the December, 2009 issue of Diabetes Care, the researchers reported the following dire predictions: "Between 2009 and 2034, the number of people with diagnosed and undiagnosed diabetes will increase from 23.7 million to 44.1 million" (Huang, Basu, O'Grady, & Capretta, 2009, p. 2225). Likewise, they forecasted expected effects on the nation's economy related to these anticipated changes: "The diabetes population and the related costs are expected to at least double in the next 25 years. Without significant changes in public or private strategies, this population and cost growth are expected to add a significant strain to an overburdened health care system" (pg. 2225).

Any way the numbers are addressed, the world at large, and the United States specifically, faces significant increases in the numbers of people with diabetes. Along with these increases can be expected increased numbers of people suffering the complications of diabetes, not to mention the influence the disease and its complications will have on the economy. Another factor is the increase in type 2 diabetes among the children of the world which will no doubt ultimately be associated with an increase in complications of diabetes due to the longer period of time of having a major metabolic disorder.

Among those who have diabetes, approximately 90-95% have DMT2 and approximately 5-10% have Type 1 diabetes mellitus (DMT1). Gestational diabetes (GDM) - diabetes that occurs during pregnancy in the 2nd or 3rd trimester, i.e. not overt diabetes - is the third type of diabetes (American Diabetes Association (ADA), 2018, pg. S13). In light of the epidemic of obesity and, consequently, of type 2 diabetes in this country, it is reasonable to assume that the incidence of GDM will increase (ADA, 2018, pg. S20). While some aspects of treatment of individuals with diabetes are similar regardless of the type of diabetes, the causes of DMT2 and DMT1 differ significantly from one another. As a result, some aspects of treatment are quite different.

The basic problem in diabetes is the absence or reduced function of the hormone, insulin, in the body. This can be due to 1) the absence of insulin production, 2) inadequate insulin production, or 3) impaired utilization of insulin (insulin resistance). Insulin is important because without it the body cannot use glucose for energy. Glucose is the body's primary source of the energy needed for all bodily functions. Insulin moves glucose from the blood stream across the cell membrane and into the cell where glucose is made available for energy. In the absence of insulin (such as that which occurs in DMT1), the body cannot use glucose, so it resorts to less effective ways to obtain energy (e.g. the breakdown of fat), which results in toxic byproducts called ketones. Ketones appear in the blood (ketonemia) and are excreted in the urine (ketonuria) in the person who has no insulin (i.e. in DMT1).

With insulin resistance (DMT2), cells in the body resist the entrance of insulin across their cell membranes. Consequently, the blood glucose rises and stimulates the insulin-producing cells to produce more insulin (hyperinsulinemia). For a time, this satisfies the need, but the insulin resistance persists. The body tries (for as long as it can) to produce more insulin to meet the perceived deficit, but eventually, in spite of the resultant hyperinsulinemia, the blood glucose increases uncontrollably. Since the fundamental problem is insulin resistance and not an absence of insulin, the body does not produce ketones.

Insulin is a hormone produced by the beta cells in the islets of Langerhans in the pancreas. It is a powerful hypoglycemic agent and it lowers blood glucose in the following ways:

Prior to 1997, diabetes was known by many names: "Juvenile Diabetes" or "Insulin-Dependent Diabetes (IDDM)," and "Adult-Onset Diabetes" or "Non-Insulin Dependent Diabetes (NIDDM)" based upon the typical age of onset and the primary treatment methodology. In 1997, an Expert Panel commissioned by the American Diabetes Association recommended changes in the classification of diabetes. The panel advised that the former classification system that focused on the pharmacological management of diabetes be replaced by one that addressed disease etiology (Expert Panel, American Diabetes Association, 1997). There are three categories or types of diabetes: diabetes type 1 (DMT1), diabetes type 2 (DMT2), and gestational diabetes (GDM).

One other form of diabetes that occurs among youth (typically those under the age of 25) is now recognized, but it is exceedingly rare (occurs in less than 5% of children with diabetes). This form of diabetes is known as "maturity-onset diabetes of the young" or "MODY" and it is due to monogenetic (chromosomal) defects that influence beta cell function. It occurs in young, non-obese individuals who are not necessarily members of the ethnic groups known to be at high risk for DMT2. It is characterized by mild fasting hyperglycemia (100–150 mg/dL) and is differentiated from other types of diabetes through commercial genetic testing which is readily available (ADA, 2018, pg. S13).

This is not to be confused with DMT2 which can occur in obese children. Rather, it is a distinct entity characterized by impaired insulin secretion with minimal or no defects in insulin action (ADA, 2018). Treatment is usually with low-dose sulfonylureas (Hattersley, Bruining, Shield, Njolstad, & Donaghue, 2009, pg. 37).

Another entity which is not considered diabetes, but is a very important condition, is "Pre-Diabetes." Pre-diabetes (or "High-Risk for Diabetes") encompasses two conditions: Impaired glucose tolerance (IGT) and impaired fasting glucose (IFG). IGT is defined as a two-hour post-load glucose of 140–199 mg/dL during a standard oral glucose tolerance test. IFG is defined as a fasting glucose of 100-125 mg/dL. While neither constitutes evidence of diabetes, each represents a risk factor for the development of diabetes, and as such is considered an intermediate stage in the progression toward overt disease.

Many people have pre-diabetes and are completely unaware of their condition. As such, they are at great risk of developing DMT2. Since interventions are available to help reduce the likelihood that these individuals will develop DMT2, it is imperative that persons with pre-diabetes know who they are. Screening for diabetes and educating people about the signs and symptoms are the best ways to achieve this goal.

But who should be screened? More on this later with the discussion of "Risk Factors for Diabetes."

Type 1 diabetes (DMT1) which is more commonly found among younger people than among older persons, is a consequence of an absolute lack of insulin. Most cases of DMT1 are characterized by the presence of antibodies in the individual's blood that identify the autoimmune process that leads to beta-cell destruction. Clinical evidence of this condition is classic in that it creates polyuria (excessive urination), polydipsia (excessive, prolonged thirst), and polyphagia (excessive eating) as the body tries to cope with the underlying pathophysiology. Without exogenous replacement of insulin in this case, the inevitable result is the development of metabolic acidosis (diabetic ketoacidosis) and ultimately, if uncorrected, death.

Type 2 diabetes (DMT2) has typically been a condition of adults who are overweight, and is a consequence of insulin resistance. Epidemiological data and clinically based reports are now indicating that obesity is reaching epidemic proportions among children (Hughes & Reilly, 2008; James, 2008). It follows that DMT2 is also reaching epidemic proportions within this population particularly among Native Americans, African Americans, Hispanic/Latino Americans, Asians, and Pacific Islanders. Increasing rates of obesity among these groups have been, and continue to be, blamed, at least in part for this dramatic change (Adams & Lammon, 2007; Soltész, 2006).

Gestational diabetes (GDM) is defined as any degree of glucose intolerance during pregnancy, with the resolution of the glucose intolerance after pregnancy. GDM affects about 4% of all pregnant women. Once a woman has had GDM, her chances are two in three that it will return in future pregnancies. Many will go on to develop DMT2 later in life.

The cause of DMT1 is not known for certain. It is a primary subject of research. DMT1 is believed to be the result of both genetic and environmental factors: heredity, auto-immune reactions which effectively destroy islet cells, and possibly effects of viral infections. Current beliefs are that all factors must be considered. 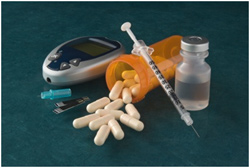 The cause of DMT2 is believed to be a combination of many metabolic abnormalities. Insulin resistance is typically one of the first abnormalities seen. Others include impairment of insulin secretion and elevated glucose production by the liver. Most persons with DMT2 are overweight. Hence, there is a strong association of DMT2 with overweightedness and obesity. In some cases, weight reduction can ameliorate the metabolic problem. (Such an occurrence should not be misconstrued to reflect "cure" of diabetes, but rather, "control" of diabetes via educated changes in the way one eats and the incorporation of regular exercise into one's life. Discontinuation of the control regimen with resultant weight gain will likely result in a return of the clinical signs and symptoms of overt DMT2).

In the past, practice guidelines advised a two to three month trial of lifestyle management (changes in one's nutritional intake and exercise) when DMT2 was diagnosed, with the introduction of oral medications if these efforts were unsuccessful in attaining control of the blood glucose after that period of time. Practice guidelines recommended by the American Diabetes Association for the individual with newly diagnosed DMT2 changed within the past several years and now include both lifestyle management (medical nutrition therapy and regular exercise) and oral medication (metformin, unless contraindicated) from the time of diagnosis (ADA, 2014). Intensive education about diabetes, medical nutrition therapy, and self-monitoring of blood glucose (SMBG) (and documentation of the results!) remains fundamental to success in the treatment of diabetes. "Continuing timely augmentation of therapy with additional agents (including early initiation of insulin therapy) as a means of achieving and maintaining recommended levels of glycemic control (i.e., A1c < (less than) 7% for most [non-pregnant] patients)" (pg. S23) and assuring follow up at regular intervals to verify blood glucose control are critical to reaching established goals (ADA, 2014).