The human immunodeficiency virus (HIV) is a blood borne pathogen that attacks the human immune system. It is spread primarily through breast milk, blood or sexual fluids that come into contact with mucous linings (present in the anus, vagina, eyes, and throat), breaks in the skin, or open wounds. Once the virus is present it reproduces itself within the host's CD4 cells (a type of white blood cell).

There are two strains of HIV: HIV-1 and HIV-2. Most people who have HIV have the HIV-1 virus, but in parts of Africa some people have the rarer HIV-2 type. However, because of HIV's ability to mutate, there are numerous subtypes. For instance, some HIV strains are resistant to current antiretroviral medications, or cause the disease to progress more rapidly. It is possible to have HIV-1 and HIV-2. Repeated exposures increase the viral load in the body. As the white cell count decreases, the disease progresses into acquired immunodeficiency syndrome (AIDS), a syndrome that increases opportunistic infections in the body. 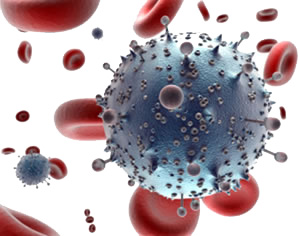 AIDS is a syndrome determined by a CD4 count of less than 200 cells per cubic millimeter of blood, or when certain cancers and opportunistic infections occur. As a syndrome AIDS causes a wide range of complications which endangers someone with a suppressed immune system. In asymptomatic cases, it can take AIDS ten years or more to fully develop in the average HIV-positive adult (Know Curriculum, 2007 revision), but it can progress more rapidly in people with poor health and nutrition.

HIV survives in the body by traveling through the bloodstream and seeking out CD4 cells. When its receptors detect a CD4 cell, it attaches itself to it and assimilates the ribonucleic acid (RNA) structure of the cell. The virus replicates by using the cell's RNA and protein building blocks, creating a new virus, after which the virus "buds" from the cell and is released into circulation, where it penetrates other CD4 cells. The majority of the CD4 cells that retain information on previous infections are killed off, making it more difficult to fight against re-exposure.

The immune system is still capable of killing HIV when it has not infected a CD4 cell, but it is more difficult to do once it takes hold. HIV medications suppress HIV by hindering its ability to attach to CD4 cells and interrupting viral replication. With immediate prophylaxis, HIV has a reduced chance of sustaining itself within the body, especially within two weeks (days if able). If HIV sustains itself, viral levels can be controlled with medication, but there is no cure available for the disease (HIV levels decrease but traces of the disease stay behind and start the replication process again if allowed to).

The human immunodeficiency virus (HIV) is a blood borne It is important to understand that HIV survives by attacking CD4 cells, and by being an easy disease to overlook. Most symptoms produced by HIV can be confused for another disease until a formal diagnosis can determine otherwise. This progression list will explain the timeline between exposure and HIV sustaining itself within its host: