In this chapter you will learn what HIV and AIDS is, how it impacts people, how it is transmitted and the chances of infection in the workplace. You will also learn the debunked myths of contamination, the possible origin of HIV, and what is being done to reduce infection rates. 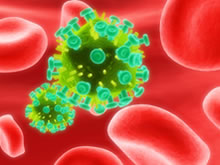 The Human Immunodeficiency Virus (HIV) is a blood borne pathogen that attacks the human immune system. It is spread through bodily fluids that come into contact with wounds and mucous membranes. Once the virus is present it reproduces itself within the host's CD4 cells (a type of white blood cell). White blood cells are essential for our body to fight off sickness. As the white cell count decreases, the disease progresses into AIDS, a condition that increases opportunistic infections. It is important to remember that white blood cell production does not stop when someone acquires HIV.

Acquired Immunodeficiency Syndrome is a chronic, potentially life-threatening condition caused by the HIV virus. It is characterized by a CD4 count of less than 200 cubic millimeters of blood. In asymptomatic cases, it can take ten years or more to fully develop in the average HIV adult (Know Curriculum, 2007 Revision). It's notably dangerous because it increases opportunistic infections and causes rare complications.

How is HIV Diagnosed?

HIV can be easily overlooked; as a result patients may not know they are infected. In the first few months victims will have flu like symptoms, such as headaches, fever, and fatigue. Swollen lymph glands can occur as well, but they go away after a month or two. The patient will seem fine but progressively get sicker as the immune system becomes weaker. HIV antibodies are detected within six to twelve weeks of infection, so multiple blood tests may be needed.

IV antibodies are detected within six to twelve weeks of infection. This is called a window period, a period of time that a test cannot detect antibodies or the HIV virus because levels are not high enough. Depending on last exposure, it may be recommended that a person test again after the window period has finished.

It is bad enough that people are dying of AIDS, but no one should die of ignorance.

Diagnostic tests sample blood or saliva to test for HIV antibodies or the virus itself. While most tests focus on blood there are other testing methods available, such as home kits, rapid testing, enzyme-linked immuno assay, oral fluid and urine testing, and lastly the Western blot.

Home kits are available at any local pharmacy, and can be used in private. Home kits allow testers to collect blood samples (which are applied to a special card) so they can send them to a private lab. Users are given a private reference number they can use when trying to obtain results with the lab later. Those who test positive will be given access to pamphlets and information, and encouraged to follow up with an official HIV test (HIVTest.CDC).

Rapid test uses oral fluids, or blood to test for HIV antibodies. It is a low-tech method that doesn't require machinery to produce results (Point-of-Care Rapid Tests for HIV Antibody), instead, relying on reactions of fluids. Screening is usually completed in twenty minutes, and is done twice (spaced apart) to provide a better reading. It is remarkably cheaper than an enzyme immunoassay, and is widely used in Africa (Point-of-Care Rapid Tests for HIV Antibody).

Oral fluid and urine tests are usually screened through enzyme immunoassay, and confirmed later with a western blot. The test focuses on detecting antibodies in the content of the samples. Urine is reportedly less accurate than oral fluid (HIVTest.CDC).

Western blot is a test that looks for specific antibodies in samples, isolates them, and compares them to other stored samples. If they match, it can indicate a positive HIV test. Like the enzyme-linked immune assay, readings are normally false if the patient is tested too early. This is mainly used as an assistive diagnostic tool (Human Immunodeficiency Virus HIV-1 Western Blot).

Note: RNA screening tests for HIV are available but are not widely used. These types of tests attempt to detect HIV genetic material.

How is AIDS Diagnosed?

As HIV progresses to AIDS the body's CD4 lymphocyte (white blood cell) count decreases. When the CD4 count falls below 200 cubic millimeters per blood, the patient can be diagnosed with AIDS. This process can take as much as ten years or more. The average CD4 count is 800-1500. Rare complications, such as AIDS associated dementia and reoccurring TB, can also be used to diagnose AIDS, since these illnesses wouldn't normally infect someone with a healthy immune system (the biggest concern being tuberculosis). HIV testing is now being standardized with TB, and vice versa per World Health Organization (WHO) recommendations.

As HIV enters the body it travels through the bloodstream, patiently waiting for white blood cells to attract its receptors. When it detects a cell, it attaches itself to it and manipulates the RNA structure of the cell. The virion replicates using the cell's RNA and protein building blocks creating a new virus, after which the virus buds from the cell and is released into circulation, where it penetrates other CD4 cells. The majority of the CD4 cells that do retain information on previous infections are killed off, making it harder to fight reexposure later. The immune system is still capable of killing HIV in its naked form (pre white blood cell phase). HIV medications suppress HIV by hindering its ability to attach to white blood cells and/or use the cells RNA and protein to replicate itself. With immediate prophylaxis, HIV has a reduced chance of sustaining itself within the body.

How is HIV Transmitted?

There are two strains of HIV: HIV-1 and HIV-2. Most people have the HIV-1 virus, whereas some parts of Africa have the rarer HIV-2 type. However, because of HIVs ability to mutate there are numerous subtypes of HIV. For instance, some HIV strains are resistant to modern medication. It is possible to have HIV-1 and HIV-2. Repeated exposures increase the viral load in the body.

Medication resistance has increased the number of premature deaths in the HIV community, as well as coinfections. Worldwide, tuberculosis is the leading killer of HIV infected people. HIV patients, according to the WHO, are 20-30 times more likely to develop an active TB infection (WHO Policy on Collaborative TB/HIV activities, Tuberculosis, 2012). While most healthy people with TB suppress it and in fact avoid a second reoccurrence, HIV patients experience them more often (though they can be spaced years apart) until proper treatment is given (Know Curriculum, 2007 Revision). Hoarse coughs, night sweats, fever and weight loss are primary symptoms to look out for (WHO Policy on Collaborative TB/HIV activities, Tuberculosis, 2012).