How to Take This Course
Download to Read Offline
Start Course
Why the Hoopla?
The Medical Record
What to Document
Fax & Computer Records
Making Charting Easy
Nurses vs. CNA
Documenting Notes
Documenting Went Wrong
How to be Sure
References
Take Post Exam Nursing CE Course Catalog

Why is there So Much Hoopla about Documentation Anyway?

The old saying "if it's not documented in the medical record it was not done" has never been more timely as state and federal governments continue to enact legislation to protect various healthcare consumers. Consider the increased interest in the elderly that occurred in the late '80s and early '90s. As a result, legislation and regulations emerged relating to long term care facilities and new litigation (lawsuit) possibilities occurred. Proper documentation reflects the quality of care that you give to your clients and is evidence that you acted as required or ordered.

1. Regulations based on state and federal legislation or statutes. Regardless of the term used, they are the law.

When dealing with statutes and regulations, it is important to understand those in your own state. Violating any one of them would make you and your employing facility automatically negligent (not exercising the degree of care that a person of like training and experience would do under the same or similar circumstances) without the right to defend yourself. On the brighter side, proof of your compliance to any particular statute or regulation, can be used in your defense to show that you did follow a standard of care.

Expert witnesses are used by both prosecuting and defense attorneys to establish standards of care. Depending on the kind of legal case, an expert witness could be a nurse, a doctor, a facility administrator, etc. They are usually individuals who are well known and respected in their field. An expert's role is to explain to the jury the standard of care based upon their particular area of expertise. They are allowed to use articles, practice guidelines, policies, etc. to prove their point. The jury will interpret the opinions of the expert witnesses and determine for themselves if negligence has occurred.

Although your employer should periodically update their policies/procedures and keep you informed about new or revised standards of care and/or state legislation, it is still your responsibility to get that information for yourself so that you can minimize your risk of liability.

Along with keeping yourself informed, it is also critical that you value doing complete and accurate documentation in the medical record as yet another means of avoiding liability. It is well known that the medical record can change the entire climate surrounding a lawsuit. In fact, medical records, in themselves, may be the very source of a lawsuit. Not only is complete and accurate documentation a means of telling the story of a client's health care history over time, but it is also often required to justify reimbursement of services that are provided to a client. When that reimbursement is coming from programs like Medicare and Medicaid, denial of those funds would certainly be a critical situation in facilities caring for the elderly and/or the poor.

Failure to document or faulty documentation on your part is risky behavior that should be avoided. Knowing that, it is highly suggested that you obtain a copy of the documentation standard (policy) where you are employed and become very familiar with it. Questions you may have can be directed to either your immediate supervisor or a member of the education department in your facility.

Here is a fictional case that exemplifies how negligence may be interpreted in court.

A 17-year-old was partially paralyzed and severely brain damaged after an accident. He was admitted to the hospital for intensive rehabilitation. Soon afterwards his parents told his nurse that a part on the right side of his wheelchair was missing and that they saw scratches on his right arm. The nurse observed the scratches but did not document them in the medical record.

Later the patient's hip became red, swollen, and increasingly painful. His mother also reported these symptoms to the nurse, who again failed to document them. When the patient was finally diagnosed with a broken hip, his parents sued. The court found the hospital negligent and awarded the patient a large monetary award (Charting Made Incredibly Easy, 2012, p. 231). 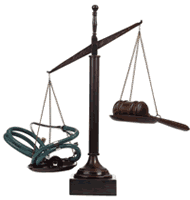 You probably didn't become a nurse in order to master the art of charting. You probably didn't get into the field to prevent a malpractice suit from occurring. You most likely do not spend your waking hours fantasizing about documentation. How could you possibly want to chart, let alone enjoy it, when it keeps you from giving direct patient care…but in reality, documenting is patient care! (Charting Made Incredibly Easy, 2012, p.v (foreword).